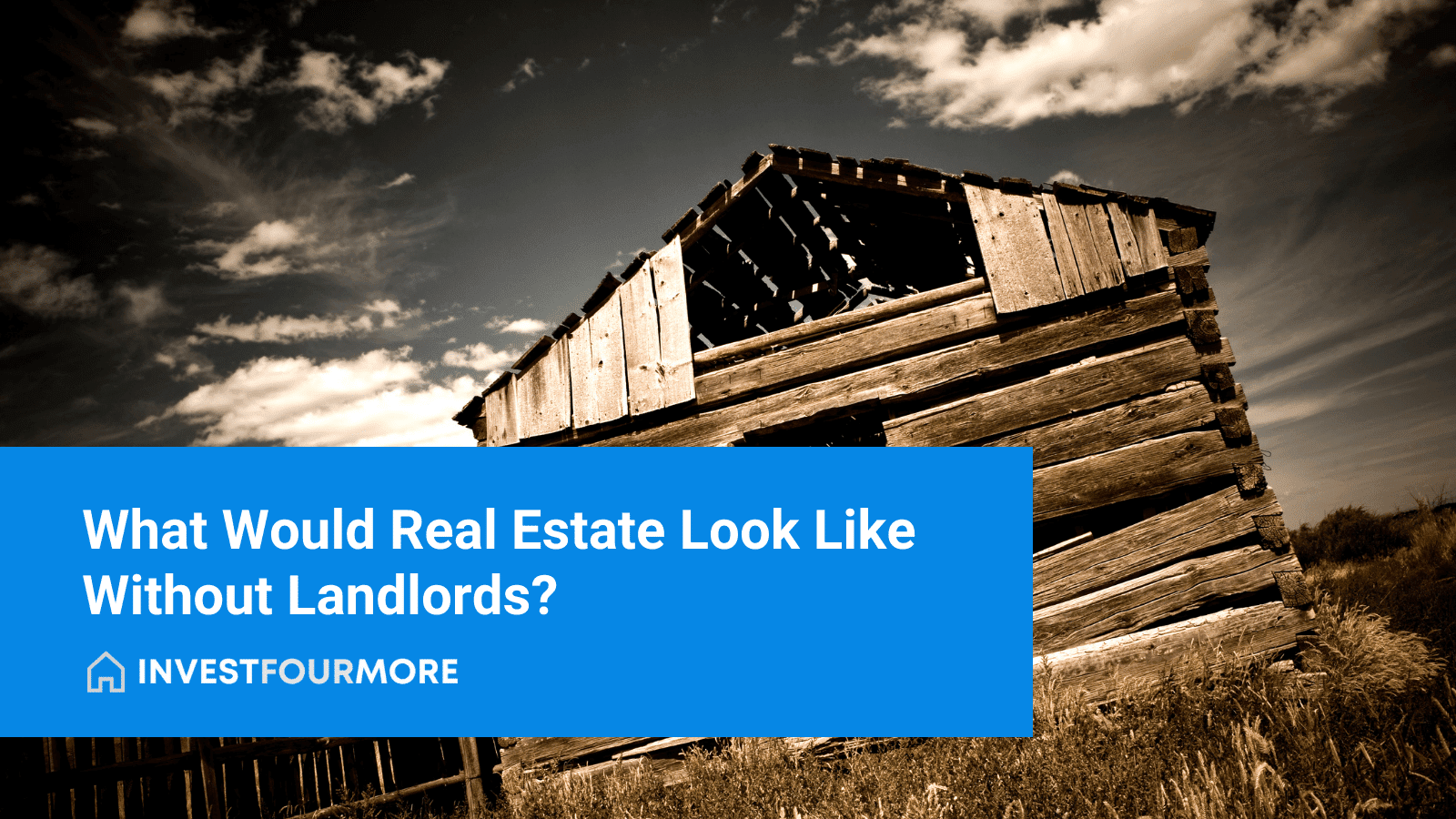 There has been a growing movement to get rid of landlords across the world as people ask themselves, “Are landlords evil inherently?” Many people think landlords make money off of a basic human right and those people believe that is wrong. A lot of people also think that landlords are buying up all the properties that would normally go to owner-occupants and that is what is driving up housing prices. Is this really what is happening or is something else driving higher prices? What would the world look like without landlords? Would it be better or worse?

The first thing we must talk about is how supply and demand impact real estate. Some people say that more landlords buying homes means prices go up and price regular homeowners out of the market. That idea has some merit but if there are fewer landlords that also means there are fewer rentals and the rental process would skyrocket. There are two markets that must be looked at: the rental market and the ownership market.

Real estate prices are most definitely driven by supply and demand. The last housing crash was caused by horrible loans which cause builders to go crazy and overbuild. Then the bottom dropped out when those horrible loans began to default and there were not enough people to buy all the houses that were built. When the loans defaulted, the foreclosures added to the housing inventory and destroyed the market even more.

The latest run-up in prices has been caused by the opposite market conditions. There have been too few houses being built, which has restricted housing inventory and caused prices to increase. The big difference this time around is there are not horrible loans driving demand, but regular buyers with some of the strictest lending ever. When there is super tight inventory and not enough houses, prices for rentals and owner-occupied houses both go up which is what we are seeing.

Are Corporate Landlords Buying All of the Houses?

A lot of people also say that corporate landlords are buying all the houses and ruining it for homeowners. There are corporations and institutions that buy rentals and even flips. Zillow was buying flips but recently stopped because they were losing money and could not handle the remodel process.

When you look at Blackstone, Invitations Homes, American Homes for Rent, and other funds that buy houses, the total amount being bought adds up to a tiny percentage of homes selling. I believe it is 1 to 2% total! Yes, corporations are buying homes, but they are buying in such small amounts that it is not impacting the market except in very specific areas where they have concentrated some of their purchases.

Yes, corporations are buying homes, but they are not buying all the homes, or even enough homes to affect that market at all in most areas.

How Many Homes do All Investors Buy?

The truth is most homes, in fact, the vast majority of homes, are owned by owner-occupants and owner-occupants drive the market. Something else that most people are not talking about is that more owner-occupants own houses now than in the past 9 years (except for a weird blip in the data in 2020). The owner-occupant homeownership rate is more than 65% in the United States right now and it was less than 63% in 2016. The homeownership was higher prior to the last housing crash but that was due to crazy lending giving loans to anyone and we say what happened.

What if All the Vacant Homes Were Used to House People?

The truth is there are not millions of well-maintained single-family homes in affordable areas just waiting for owner-occupants to buy them if only the evil landlords would sell them! It makes no sense that a landlord would keep properties vacant on purpose as that does not make them any money.

You also might notice that if 65% of homes are occupied by the owners and only 5 to 15% are owned by landlords, that does not add up to 100%. The vacant homes are what make up for the difference in these numbers.

Do Landlords Contribute Anything?

Another common statement being made more and more is that evil landlords do nothing. They hoard housing and provide no service whatsoever. People tell me to get a real job all the time since I am a landlord. I think most people in real estate would know this could not be further from the truth but many people don’t know how it works. I am a landlord, I flip houses, and I am a real estate broker. Am I biased? Yes, of course, we are all biased based on your past and opinions but I have also been in the industry for 20 years and know how it works.

How does it work when you buy a rental property?

I would say that landlords do far from nothing. It is true that a landlord can hire a property manager that takes care of most of the renting and maintenance issues but it takes work to find and keep tabs on the property manager as well. When people tell me to get a real job I think they forget I had to have a real job to buy these rentals and still have other income because one rental will not make enough money to live on. Some people will say that this makes being a landlord seem horrible, and yes it is work, but it is well worth it if you buy the right properties and plan well. The landlord genie does not simply drop rental properties into landlords’ laps and they do nothing the rest of their lives as many people seem to think.

What Would Happen if There Were no Landlords?

Some people will say all evil landlords need to go and the world would be a much better place without them. I don’t think many people think through how that would work. If there are no landlords, there would be no rentals unless the government owned them. Even the most extreme idealists frown upon government ownership of housing as we have all seen what that looks like. South Africa tried to give away free houses to the homeless for a couple of years but found the program did more harm than good. People simply rented out the homes or sold them and took the money instead of using them for shelter.

I have heard people counter that everyone should own a home and that means no landlords are needed and the government does not have to own the rentals at that point. The fact is that not everyone wants to own a home. I think homeownership is great and most people are far better off owning than renting, but that does not mean it is right for everyone. College students, people who travel often, people who move around a lot, people who don’t want the responsibility of owning, all might rather rent than own. But people say they literally should be forced to buy.

If everyone owned their own home, how would they pay for it? The government offers low money down loans for people that want to buy but they still must have good credit, good job history, and make enough money to afford the loan. Are we going to give everyone a loan and hope they keep up on payments? What if they do not keep up on payments, do they get to live there for free? Why should some people get free houses and others not get free houses and how do we decide which houses people get? There are many things that do not work out in the real world with everyone owning.

Another issue is who will fix up the houses when they need work? Not everyone will have the money or skills to maintain houses. When they become unsafe, who will step in and pay for the repairs or force the owner to make them? If someone wants to sell a house will they be forced to buy another one within a certain time?

What about the giant apartment buildings that are owned by one company. Will each unit be sold off to one person? Who will pay for the management companies to maintain the common areas of the building? What if people stop paying the HOA? Will they be forced to move out and buy a different property somewhere else? What if people stop paying property taxes, can the local government take the property for back owed taxes? If so, where will the people who were kicked out buy?

As you can see, there is a reason that people rent houses and apartments, and condos, and commercial space as well.

Getting Ahead in Life

A lot of these ideas stem from the constant bombardment that the United States is failing the middle class and poor and that something needs to change. The simple fact is that wages have been increasing faster than inflation for decades and everyone is winning right now, but that data gets swept under the rug. The middle class is shrinking because more people are moving up to the rich class not because they are becoming poor.

Rental properties are one of the best ways for the poor or middle-class person to make it big and get ahead in life. If we want to help people, tearing down those who are doing well will not accomplish anything, but teaching the poor and middle class to get ahead will! I started with very little money and built a real estate portfolio worth millions in less than ten years. Almost anyone can do this with hard work and education about real estate.

Most millionaires are self-made and it is said most people become millionaires from real estate. Why in the world would we destroy one of the best ways for people to move up in the world and create wealth for themselves and their families?

The simple fact is that landlords are needed to provide housing for people who want to rent or can’t buy. The choices are to let individuals and corporations own the rentals, manage them, and repair them, or to let the government do it. Just getting rid of landlords is not an option. If people really think that landlords are taking advantage of people and it is easy. There is no law stopping them from buying houses and renting them out for whatever price they think is fair or even for free. I am not sure why people should not be able to profit from housing anyway. People are allowed to profit on food, on water, on clothing and those are just as essential as housing or more so. We never hear that all grocery store owners should get a job and stop selling food. If people want to get ahead in life, real estate, in particular rental properties, is one of the best ways to do it.

How to Sell Your House Fast For Cash in Northern Colorado

7 thoughts on “Do Landlords Help Society or are they Evil?”