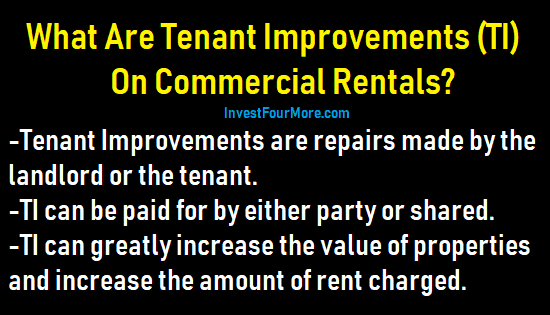 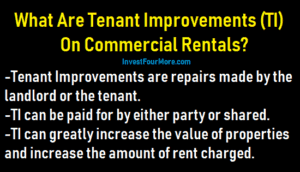 I bought a 68,000-square-foot strip mall, and while I was looking at the deal, the listing agent mentioned TI. I was newer to the commercial real estate game after spending most of my time in the residential world. I did not feel too bad because, after meeting with the listing agent, my partner asked me, what is TI? I told him it must be taxes and insurance. I was wrong! TI stands for tenant improvements and describes repairs made to a unit for the tenant. The improvements may be paid for by the tenant, landlord, or a combination of both.

What is TI and what does it consist of?

TI may consist of anything the tenant needs for them to operate their business. The building we bought had a restaurant that had moved in a few years prior to our purchase. The owner of the building agreed to pay for $150,000 of tenant improvements prior to the restaurant moving in. The restaurant owner managed the improvements, but the landlord paid for them.

The improvements consisted of new kitchen equipment, paint, flooring, a new floor plan, and more. TI can consist of just about anything the tenant needs. In another unit, we constructed two new rooms for a dance studio, painted the walls, opened up the ceiling, and added windows. We paid for those improvements, and they added the finishing touches.

Why would the owner pay for tenant improvements?

Many people assume that tenants pay for the improvements when they rent a space. However, many owners are willing to fix up their buildings for tenants. While it might seem crazy to spend $150,000 for a restaurant to lease a space for 5 years, it makes sense when you dig into the numbers.

The owner of the building is making about a 50% return on their investment by leasing that space to the restaurant assuming no one else would rent it out. The decision to spend that much money on tenant improvements gets trickier when you may be able to lease out the space but for a lower rent or short lease time. If you could rent it out for $4,000 a month without doing any work, it takes more than 6 years to make your money back.

Can TI increase the value of the property?

Tenant improvements can make it easier to lease space out and raise the rent on a space. The only benefit to raising the rent is not only that you make more money every month, but you also increase the value of the property. Commercial real estate is typically valued based on CAP rates. The CAP rate is the net operating income (NOI) divided by the value of the property. For example:

The CAP rate varies based on the type of property, the location, the leases, and other factors. If you know your property would sell for about a 10% CAP rate, you can increase the value by increasing the income. If you are able to increase the NOI to $12,000 a year in the example above, the property would be worth $120,000 instead of $100,000.

I have a CAP rate calculator that easily calculates the CAP rate for you.

The property we bought was sold at about a 9 CAP (9% CAP rate). I think the CAP rates in my area for this type of property are closer to 7% for market value, but we got a really good deal. How much did the restaurant lease add to the value of the property?

The reason landlords or owners will pay for tenant improvements is not just because they will increase the rent; it is also because they increase the value of their properties. If they are looking to sell or refinance the property, a sold long-term tenant can add millions of dollars to the value.

If we consider the tenant who was only going to pay $4,000 a month in rent and did not require any tenant improvements, that lease would:

While the lower dollar lease is adding value to the property, it is adding hundreds of thousands of dollars less in value.

I have a brand new book that is all about commercial real estate. Build a Commercial Rental Property Empire. The good, the bad, and the ugly. I go over all the details of investing in the commercial business and include 10 case studies on my own properties. You can get the book on Amazon.

How can tenant improvements add value aside from leases?

When you make tenant improvements, you are improving the building as well as the tenant’s unit. If you make the right improvements, it will be easier to rent out the units in the future if the current tenants leave. When the owner spent $150,000 for the restaurant, he made that space much more appealing for any business, especially another restaurant. Another restaurant may need a few things changed, but they most likely will not want to spend that much money again. It also may be much easier to rent out the space when it is already set up for a restaurant.

Below is a video of the dance studio right before they moved in:

Who should pay for TI?

In scenario 1, the tenant pays lower rent but has to front the $50,000. One of the biggest issues is many tenants may not be able to front that money on top of everything else they will need to get their business running. Even if they have all the cash in the world, it takes them 50 months to break even. Up until that 50th month, they have paid more in rent and TI than if the landlord paid for the TI and the tenant paid higher rent.

In my opinion, it makes sense for the landlord to pay for most of the TI if they can increase the rent to make up for it. Not only does the landlord make more money in the long-run from increased rents, but the value of the property also increases from the day the lease is signed with the higher rents. The value of the property increases much more than the costs of the TI in most cases.

Some of the best tenants will require quite a bit of TI. They will want their space to cater to exactly what they need, and it may be tough for them to find landlords who are willing to spend money on TI. If they can find a commercial property owner who will spend money on TI for them, they may be more likely to stay in that space for the long haul.

The more expensive the TI is, the more likely that tenant is to stay in that space. It is tough to find a landlord who will spend tens of thousands of dollars on TI, and once they are in a space, they will tend to stay there. By spending money on TI, the landlord can attract better and longer-term tenants.

TI can be expensive for the tenant or the landlord. The landlord usually has more to gain by attracting tenants who will pay more rent and stay longer, and the value of their property will increase if they are able to charge higher monthly rent. Before we rented out one of our vacant spaces to the dance studio, there was a tenant who wanted to start a laundromat in that unit. They wanted at least $150,000 in tenant improvements made before they would consider the unit. I thought that was crazy because it would take ten years to make that money back based on the price they wanted to pay. However, that lease would have added almost $400,000 in value to the property. It could have made sense to spend that much if we had no other tenants interested. However, that dance studio lease added more value because they were willing to pay a higher lease rate and only needed $40,000 in TI.

While completing TI for tenants often makes sense, the landlord can pick and choose the right tenant and the right TI to complete. Had we finished out the space for a laundromat and they went under, there would be very few tenants who would want that space without major renovations, and we would have wasted a lot of money. 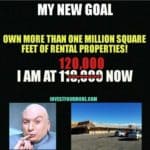 My Goal to Buy One Million Square Feet of Rental Properties 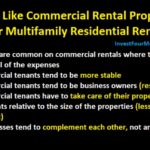 The Pros and Cons of Commercial Real Estate Investing 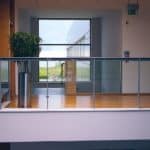 How Does a Triple Net (NNN) Commercial Lease Work? 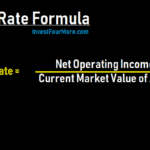 What is a Cap Rate and How is it Calculated? 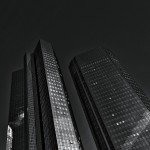 Is it Better to Invest in Commercial or Residential Real Estate?