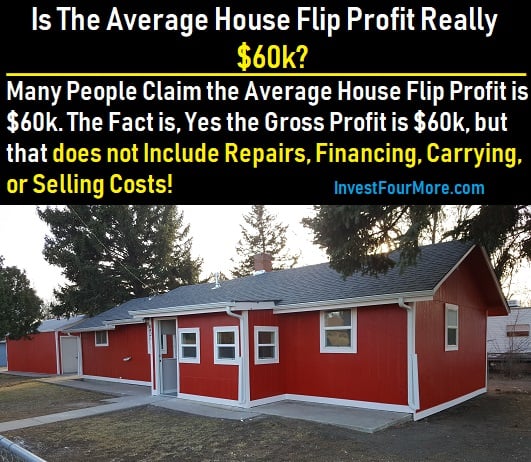 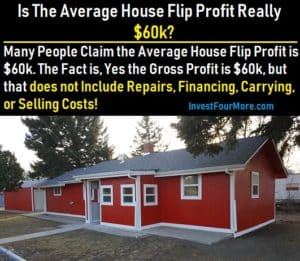 I have seen many video ads and Facebook ads about the average profit on a house flip being $66,000. I flip a lot of houses, and that number seemed very high to me. I did a little research to figure out what the actual average profit on fix-and-flips is. I can tell you that $66,000 is not the average net profit that house flippers make: it’s just the gross profit. That number is leaving out any expenses house flippers have, and it includes houses that were not flipped as well.

There is a company called Attom Data Solutions that compiles property records. They have listed the average profit on a flip as from $50,000 to $70,000 the last few years in their quarterly reports. In their data, they list the profit on a flip as being calculated with the sales and purchase price. They admit this is not the real profit, and many other costs will be incurred for house flippers. That does not stop many publications from claiming the profit on the average flip is $66,000 or one of the other numbers that are listed in their reports.

Does this data include houses besides flips?

Something else to consider is that not every house in this data is a flip. Attom Data uses any property where a sale occurs less than one year after the last sale. That means that many of the houses compiled in these reports are not flips. Sometimes, owner-occupied buyers have to sell a house less than a year after they buy it. If this data had included only investor purchases, that may show a more accurate picture; however, it does not. Owner-occupied loans are included, and more than 10% of these “flips” were FHA loans which are only available to owner-occupied buyers.
Check out the video I did on the average profit on a house flip below:

Since other non-flip house sales are included in this data, the data is skewed. The profits would be shown to be lower if owner-occupant non-flips are included. Owner-occupants would not be looking to make a profit on a house and may even lose money on the sale of their house in some circumstances.

What is the actual profit I make?

I flipped 26 houses last year and over 155 in my career. I know what my average profit is, but it could be very different for other investors. My profit has always been around $33,000 with some amazing flips and some horrible flips. I just calculated my profits on the 16 flips I have sold this year, and I have made about $40,000 per property sold. This figure comes from subtracting the purchase price, repairs, carrying costs, selling costs, and buying costs from the selling price.

I actually make less than $40,000 on each flip because I have a project manager who I pay and other expenses for marketing and my office. But I also have agents who sell houses for me including my project manager (this brings me in income that counters their costs). It is not easy to say what expenses go with what business. If I was only flipping houses, I would have much fewer expenses. I think it would be safe to say I have made about $35,000 on each flip this year.

Why has my average profit gone up on flips this year?

I would like to think I am getting better and better at flipping, and maybe I am, but there are other reasons that my profit has gone up. Housing prices have increased significantly in Colorado where I do business. Because prices have gone up, I have made more money on a few deals when prices went up while I held the property. I also have to pay much more for my flips now than I did in the past. I want to make more money on a deal because I have to spend more money to buy each house.

You can actually see the numbers and videos on just about all of my flips from the last three years on this page: Fix and flip property scoreboard.

How much is the average profit on a fix and flip?

I don’t think there is any way to get data that shows the average profit on a house flip. There are too many variables that we don’t know. We can see what the buy and sell price of a house is, but we don’t know the costs that were involved or if these houses were actually flipped.

If we look at the costs involved in a flip, we can get a better idea. On a flip that costs $100,000, there could be these costs:

As you can see, on a lower-priced flip, the costs can easily be over $40,000. The costs could be much higher for a house that needs more repairs or is more expensive. For a flip that costs $200,000, these could be the costs:

We also need to consider that many of these sales could be regular homeowners or even wholesalers. Wholesalers will buy and sell houses to other investors very quickly without making repairs. It is very likely the average gross profit on a house flip is much more than $66,000 once we take out the wholesale and homeowner deals that are not really flips. If we could get the data for houses that sold from 1 month to a year after the sale, that would eliminate most wholesale deals. If we could get data for only non-owner occupied deals, that would help even more. Finally, if we knew the average price of the properties, we could more accurately figure the costs as well. I sent an email to Attom Data Solutions to see if they were interested in helping me configure a better average flip number.

What we can see for sure is that the average profit is not $66,000. It is most likely much lower after considering all the costs involved but not as low as you might think because there are non-flips in that number. It is pretty lazy or misleading for people to use that figure as the average profit on a flip, but they do anyway. There was an article done by Money Magazine that delved into this as well. http://time.com/money/4364196/house-flippers-lose-money/

Something else to consider is that some flippers use financing and some use cash. The costs I used could vary greatly if a flipper is using cash or is a real estate agent. I am a real estate agent/broker and save money on selling costs and buying costs because of it. I show more profit on my flips than someone would who was not an agent, but I show less profit on my flips than someone who is an agent and uses cash since I finance my flips.

What is the real profit on house flips?

As you can see, I have not come up with a number yet for the average profit on a house flip. I have been doing flips for 17 years and like to think I am pretty good at it. I am also in Colorado, which is a highly competitive market. People in other markets may be able to make more money per flip. In higher-priced areas, the average profit on flips is higher due to the scaling nature of investors needing more profit to justify the risks. There are also many new investors who flip houses and most likely make much less than the seasoned investors. If I had to throw a number out there, I would say the average profit on a flip is in the $20,000 to $30,000 range. 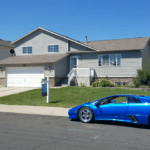 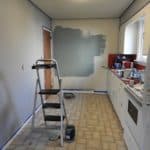 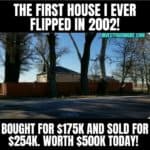 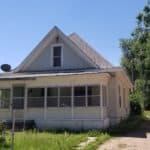 Can You Make One Million Dollars a Year Flipping Houses? 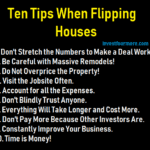 Ten House Flipper Tips That Will Help You Be Successful

4 thoughts on “What is the Average Profit on a House Flip?”